It just so happened that when I went to get Grey DeLisle’s autograph at Star Wars Celebration IV, my friends Mary Alice Ladd and Kristin Sirota were about to induct Grey into the Rebel Legion as an Honorary Member. Both are wearing costumes based on outfits in which Padmé appeared in Star Wars: Clone Wars. The Rebel Legion is an international Star Wars costuming group where members costume as the good guys of the Star Wars Universe. 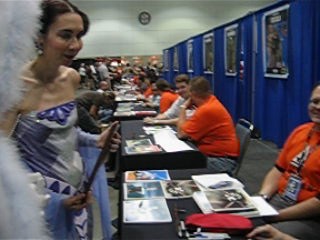